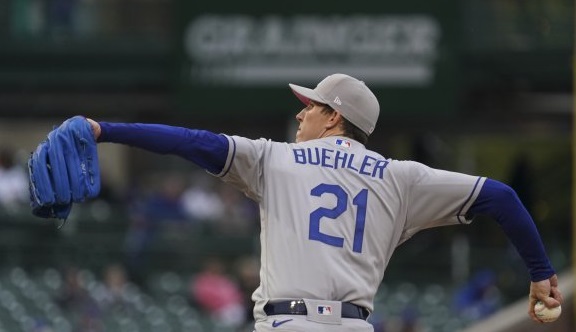 Walker Buehler (26, LA Dodgers), who had the honor of starting his first opening game in his career, pitched perfectly in three consecutive games, lowering his ERA to one point.

Buehler pitched 98 pitches (62 strikes) in seven innings, recording four hits and one run. He also struck out six while giving up two walks.

As a result, Buehler pitched 36 2/3 innings in six games of the season, recording a 1.96 ERA. There are nine walks and 32 strikeouts, respectively.

Buehler was relatively sluggish with a 4.02 ERA in his first three games of the season, but his shutout against the Arizona Diamondbacks late last month changed significantly.

Since then, Buehler has pitched two consecutive games without losing a point in five innings against the Detroit Tigers, his first game of the month, and recorded a quality start+ in the game.

Of course, it’s still early in the season. In addition, there are three more starting pitchers in the one-point ERA range within the LA Dodgers team alone. Therefore, it is still too early to discuss Buehler’s possibility of winning the Cy Young Award.

Buehler is also a 26-year-old young pitcher who can still grow. As a result, there was an expectation that Buehler would show further development even before the start of this season and win the Cy Young Award.

Attention is focusing on how Buehler, who started the season in a good mood by starting his first individual opening game and winning a shutout, will show in the upcoming mid-season race.