Son Heungmin eye fracture? Will he be able… 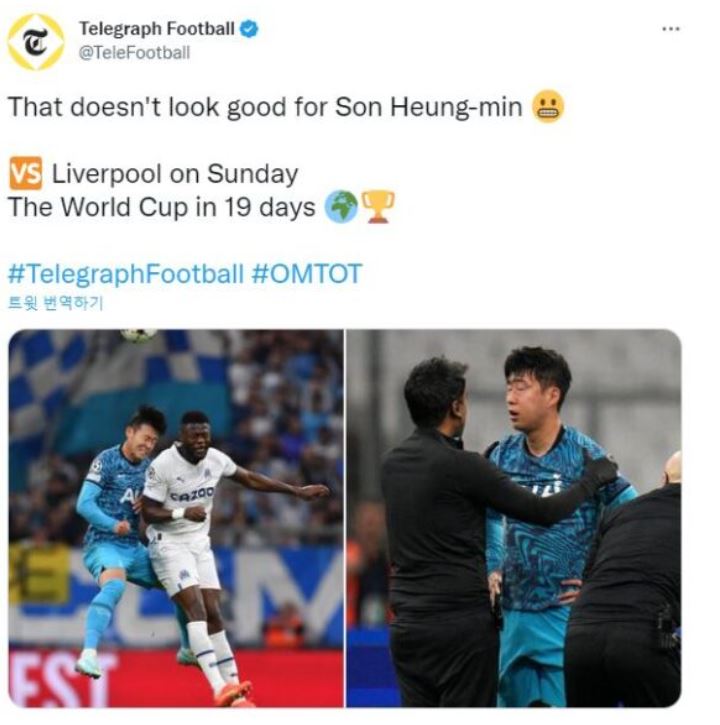 Son Heungmin eye fracture? Will he be able to participate in the World Cup?

Son Heungmin (30, Tottenham Hotspur) was injured during the game on the 2nd.

Son was seen celebrating Tottenham’s advance to the round of 16 with his teammates after the injury, but speculation is rising that he may have suffered an orbital fracture as his eyes are so swollen that he cannot open his eyes properly.

When an orbital fracture occurs, the area around the eye becomes extremely swollen. Severe injuries can interfere with eye movement, as the muscles that move the eye often get caught in broken bone fragments.

Lim Pyeong-jin, a specialist at Woori Plastic Surgery Clinic, explained, “Ophthalmic fractures vary depending on the degree of injury, and in any case, a recovery period of at least four weeks is required.” Director Lim went on to say, “If the injury is not severe, it may heal naturally, but if it is severe, eyeball depression may occur and surgery to transplant broken bone fragments may be necessary.”

If there is a problem with the function of the eye due to an orbital fracture, surgery should be performed. In general, CT is taken to check the size or location of the fracture and to determine the possibility of causing other complications.

Woo Kyung-in, an ophthalmologist at Samsung Medical Center, explained, “If the eyeball fracture is large and the degree of injury is severe, it can cause functional problems such as abdominal vision (overlapping) or eye movement disorders.”

Kim Seok-hwa, a professor of plastic surgery at Bundang Cha Hospital (Honorary professor at Seoul National University Medical School), said, “If you look at the symptoms and photos, you cannot rule out ophthalmic fractures or cheekbones depression.”

Professor Kim said, “Surgery is also possible three or four days after the swelling is reduced,” adding, “It may take more than a month to play normally.” In this case, it may be difficult to participate in the World Cup finals, which will open on the 20th of this month.

Some observers say that Son may have suffered a concussion. Concussion is a temporary brain failure and accompanied by loss of consciousness. Temporary memory loss after trauma, loss of support (the ability to point out or point out things), and confusion are also classified as concussions.

In general, when recovering without any special complications, there are rare cases in which cerebral hemorrhage occurs belatedly after no abnormal findings in the early stages.