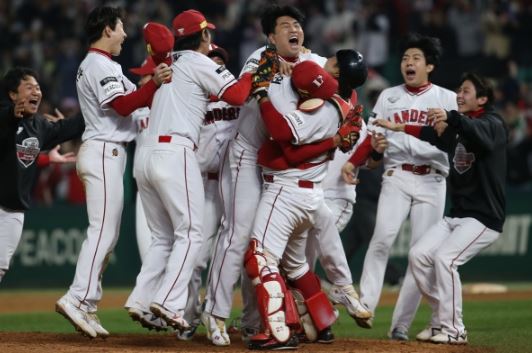 The 2022 Korean Series champion was won by SSG Landers.

On the 8th, SSG won 4-3 in Game 6 of the 2022 Shinhan Bank SOL KBO postseason against Kiwoom at SSG Landers Field in Incheon.

SSG’s starting pitcher Font became the winning pitcher with five hits (two home runs) and three runs in 7.2 innings, and Kim Kwang-hyun faced the last two batters in the top of the ninth inning after Kim Taek-hyung and Park Jong-hoon. It was also up to Kim Kwang-hyun to cheer for the victory.

Kiwoom scored the first goal in the sixth round. After Kim Hye-sung’s hit to right field in the top of the third inning, Lim Ji-yeol hit a superior two-run home run.

SSG immediately tied the game in the bottom of the third inning. After one out, Choi Jung struck out after consecutive hits by Choo Shin-soo and Jihoon Choi, but when Han Yoo-seom grounded out to first base, two runners stepped home.

Kiwoom took the 3-2 lead again with Lee Jung-hoo’s solo home run in the top of the sixth inning. But this lead didn’t last long. SSG got on base in the bottom of the sixth inning due to a second baseman error by leading Lagares, and Park Sung-han’s walk brought runners to the base. After Choi Joo-hwan’s sacrifice bunt, Kim Sung-hyun guided two runners home with a left-center double. It was a come-from-behind final hit. SSG kept the one-point lead to the end and eventually secured the championship. Kim Sung-hyun was selected as the Daily MVP for Game 6.

The overall MVP of the Korean Series was Kim Kang-min, the main character of a come-from-behind three-run shot to finish the fifth game as a pinch hitter. Kim Kang-min received 42 votes (54.5%) out of 77 votes cast by reporters, beating his colleagues Choi Jeong (21) and Font (14).