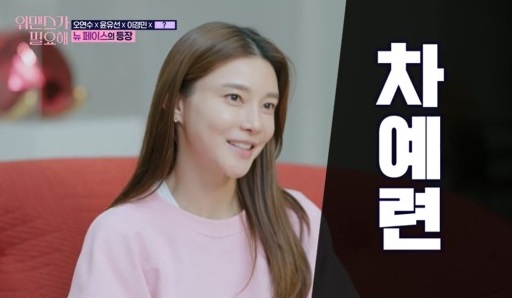 The reason for breaking up with Cha Ye-ryeon and Joo Sang-wook is because they have different thoughts about marriage.

Actor Cha Ye-ryeon made a surprise release of the love story with her husband Joo Sang-wook.

SBS’s “I Need Warmance,” which aired on the 7th, depicts Cha Ye-ryeon meeting Lee Kyung-min, Yoon Yoo-sun, and Oh Yeon-soo, who live in the same apartment.

Cha Ye-ryeon, who is close to Oh Yeon-soo and Lee Kyung-min, said it was the first time he met Yoon Yoo-sun privately. Because of this, there was an awkwardness between the two, which added to the awkwardness as Oh Yeon-soo and Lee Kyung-min were away. Cha Ye-ryeon also confessed in an interview, “He is such a senior and has a big age difference, so I started to talk carefully as a junior.”

In response, Yoon Yoo-sun first asked Cha Ye-ryeon about her relationship with Joo Sang-wook. Cha Ye-ryeon said, “I dated him from the end of the drama and dated him for a year. At that time, the husband had no intention of getting married. “At that time, my husband was only 40, and I was 33 years old,” he said.

Yoon Yoo-sun heard this interestingly, and Cha Ye-ryeon said, “So she texted me a lot. I didn’t read any messages that came all three days. Then he captured all of it and texted me. For some reason, the effort felt virtual, he said. “My husband is originally blunt. However, I liked that he made such an effort and answered the phone in three days. Then I said, “I feel like I’m going to die.” He said, “I asked him to save me once,” expressing the fact that he continued his relationship with Joo Sang-wook again.

Cha Ye-ryeon confessed that she did not receive a proposal, but Yoon Yoo-sun said, “These days, they promise to get married and hold a proposal event. “I don’t know why I do it,” he said. Oh Yeon-soo also said, “I decided to get married, but don’t you think I don’t have to,” adding, “I don’t know why I took a wedding photo.” When Yoon Yoo-sun mentioned the reminder wedding with Son Ji-chang, Oh Yeon-soo said, “I did it because my brother asked me to do it. “I didn’t want to do it,” he said.