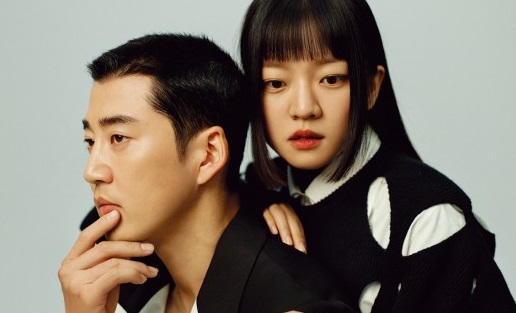 The original Olleh TV x seezn “Crime Puzzle,” which will be unveiled for the first time on the 29th (Friday), (directed by Kim Sang-hoon, scripted by Choi Jong-gil, planned by KT Studio Genie, and production studio 329), unveiled a couple pictorial of Yoon Kye-sang and Go Ah-sung. The pictorial with the November issue of Allure Korea, a fashion & life style magazine, strongly features the strange tension of mixed lovers. In addition, an interview that sincerely unravels acting transformation and efforts to build characters to be shown through the “Crime Puzzle” will be released, adding to expectations.

“Crime Puzzle” is a true chase thriller between criminal psychologist Han Seung-min (Yoon Kye-sang), who confessed to murder, and detective Yoo Hee (Go Ah-sung), who digs into the background of the case as his ex-lover and investigator in charge. The story of Han Seung-min’s struggle in prison on his own, Yu-hee’s pursuit of a mysterious murder case, and the closely intertwined two-track story create extreme suspense. Above all, director Kim Sang-hoon, who was well-received for his meticulous directing in the drama “Say as you see it,” and writer Choi Jong-gil, who showed great narrative power through the movie “Confrontation Army,” will work together to take responsibility for the completeness.

Above all, expectations and attention are focused on the synergy created by “trustworthy” Yoon Kye-sang and Go Ah-sung. Yoon Kye-sang, who was attracted to an interesting script and chose a work, said, “It was an interesting script that was easy to follow.” He then expressed his affection for the character “Han Seung-min.” Yoon Gye-sang said, “Han Seung-min” is a genius and a good fighter. It feels like an actor has grouped what he can do in a few works into one character, he said. “It was a work that could burn his will as a return work.”

The passion for the work is as special as the affection for the work. Regarding the unconventional transformation that led to a shaved head fighting spirit, Yoon Kye-sang confesses that “Han Seung-min” murdered his lover “Yoo Hee”‘s father and enters prison. Tracking “What’s wrong with this person?” is the big stem of the drama. “I wanted to express my feelings about why Han Seung-min enters prison,” he explained. He then said, “If I was determined enough to enter the prison, I thought that I should be shown on the screen.” I was confident that shaving my head would at least not make me look fragile. In the response, “I also made my body look bigger,” his efforts to build a character were seen.

Go Ah-sung was also attracted by a character called “play.” Go Ah-sung is a person who has a lot of wounds in “play” but is willing to solve it on his own. “I liked that the most,” he said adding, “The characters I played recently were altruistic and warm-hearted people. “It’s the first time I’ve played a dry role like “play,” he said, raising expectations for an acting transformation. He also delivered a unique effort to express “play.” Go Ah-sung said, “This time, I did research with the actors. At the suggestion of Yoon Kye-sang, there was a lot of time for actors to gather. “We made each scene together during the idea meeting,” he said, signaling a strong teamwork.

Han Seung-min and Yoo Hee, whose relationship is reversed from lovers to killers and investigators, inevitably confront each other. The special relationship is expected to induce viewers’ “overimmersion” in extreme suspense. In particular, Han Seung-min, who enters prison on his own for “purpose” and struggles with his life, and plays with the Crime puzzle he designed. The thrilling truth game of mixed lovers is the best viewing point that can only be seen in the “Crime Puzzle.” Go Ah-sung also said, “There is an unknown tension between Yoon Kye-sang and me. While loving, they continue to confront each other. That’s the biggest point of our drama, emphasizing the difference, raising expectations for a truth-seeking thriller that the two actors who trust and watch will complete.

Meanwhile, “Crime Puzzle” will unveil its first and second episodes on Olleh TV and seezn (season) at 3 p.m. on the 29th (Friday). Prior to this, a production presentation will be held live on Naver Now at 11 a.m., and Yoon Kye-sang, Go Ah-sung, and Yoon Kyung-ho will appear in Naver Now’s Lunch Attack from 12:30 p.m.

The full text of Yoon Kye-sang and Go Ah-sung’s pictorials and interviews can be found in the November issue of Allure Korea, a fashion & life style magazine.