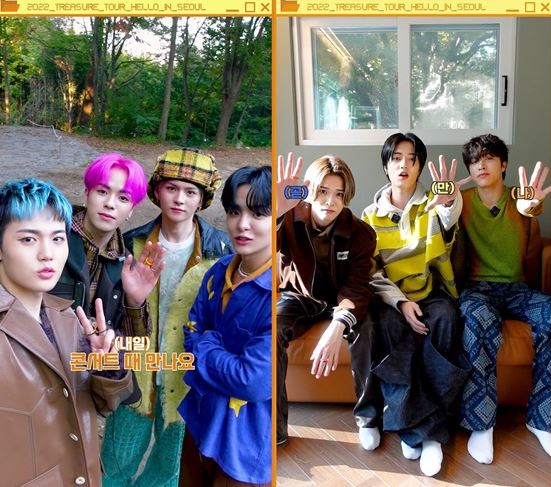 With the boy group TREASURE’s concert just a day away, the behind-the-scenes video of the VCR filming site has been released.

YG Entertainment, the agency, sequentially released VCR behind-the-scenes videos of Treasure Concert from the 9th to the 11th.

In the released video, Choi Hyun-seok and Jun-kyu were photographed against the backdrop of a wooded field, and Jung-woo left hints with meaningful movements. “I hope you can show various guesses. “I ask for your interest,” he said.

The colorful outfits reminiscent of autumn also attracted attention. In this regard, Asahi and So Jung-hwan hinted, “It’s a chic concept,” and Haruto said, “We prepared pretty costumes for Treasure Maker (fandom name).”

In particular, the members could not hide their excitement ahead of their meeting with their fans. Yoon Jae-hyuk and Do-young expressed their excitement using the lyrics of “Heart sound is Pump pump,” and Ji-hoon and Yoshi said, “I want to cry and laugh together and enjoy the concert.” “I hope it will be a great help to the fans,” he said, expressing his extraordinary affection.

Meanwhile, Treasure will hold “2022 TREASURE TOUR [HELLO] in SEOUL” at KSPO DOME in Seoul Olympic Park on November 12 and 13.