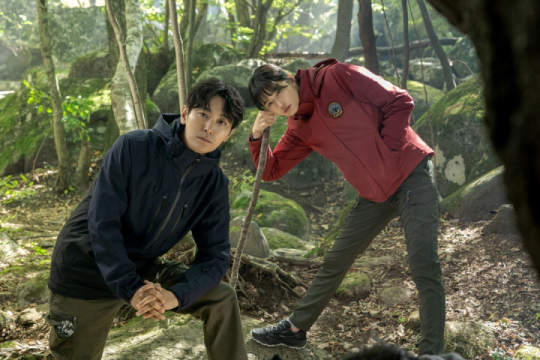 A two-shot of Jun Ji-hyun and Ju Ji-hoon, who are filming the drama “Jiri Mountain,” which is scheduled to air next year, has been released.

The new tvN drama “Jiri Mountain” (written by Kim Eun-hee/directed by Lee Eung-bok/produced by Ace Story, Studio Dragon, and Wind Pictures) is a mystery that tells the story of people climbing the mountain against the backdrop of the scenic mountain.

Following the meeting between writer Kim Eun-hee, who wrote the “Kingdom” series, and director Lee Eung-bok, who directed “Mr. Sunshine,” the combination of Jun Ji-hyun (playing Seo Yi-gang) and Ju Ji-hoon (playing Kang Hyun-jo) who are the main characters of “K-drama” is stirring the hearts of drama fans around the world.

In particular, the photo released this time shows Jun Ji-hyun and Joo Ji-hoon’s on-and-off, which are working together, raising expectations even more.

In another photo, he was completely immersed in the Ranger Seo Yi-gang (Jeon Ji-hyun) and Kang Hyun-jo (Joo Ji-hoon) who traveled through the mountains to save people in the drama, and his eyes and surrounding atmosphere changed, making him hold his breath for a moment. Unlike the tranquil and mysterious mountain scenery, the scene of them wearing a backpack with radios, GPS trackers, and various equipment such as lanterns and sticks is particularly tense.

Meanwhile, writer Kim Eun-hee and Joo Ji-hoon appeared on tvN’s “You Quiz on the Block” on Wednesday, revealing behind-the-scenes stories of “Jiri Mountain.” Writer Kim Eun-hee said, “It is ‘Jiri Mountain’ that I wanted to try a genre that saves people,” signaling the birth of a genre with a new texture.

Joo Ji-hoon, who has worked with writer Kim Eun-hee for the third time following the “Kingdom” series, also boasted an unusual relationship, saying, “I go to the writer’s studio a lot,” which made me look forward to another fantasy synergy.

Meanwhile, ‘Jiri Mountain’ will be broadcast on tvN in 2021, and will be released overseas through the global OTT platform IQIYI.