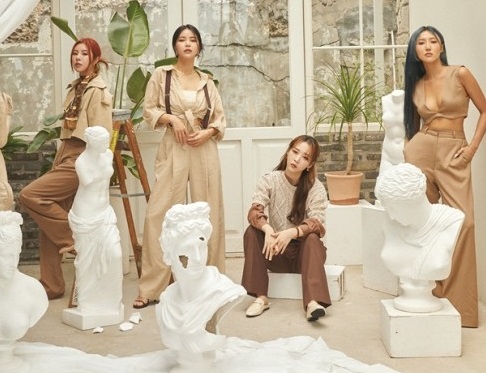 Mamamoo released additional concept photos ahead of the release of its best album on the 15th.

Mamamoo released a concept photo of its best album “I Say MAMAMOO: THE BEST” on its official SNS at midnight today (6th).

In the released photo, Mamamoo showed off a deeper mood wearing brown-colored clothes that melted their individuality. His calm yet soft charm attracted attention by creating an intellectual atmosphere.

In particular, Mamamoo added elegance and luxury with a neutral-tone makeup. In the individual cut, it looks like a sculpture of a plaster statue, prompting questions about the meaning hidden in the concept photo.

MAMAMOO will release its best album, “I Say MAMAMOO : THE BEST” on the 15th. Including MAMAMOO’s all-time hit songs, “Sky, Earth, Sea” is the only song that’s ever been released

Big’ and the hidden track of the 11th mini album “WAW” will be included.

In particular, Mamamoo rearranged or re-recorded previous songs that fans wanted to hear. The collaboration song with other artists will also be reborn as a Mamamoo version, which is expected to bring deeper emotions of Mamamoo.

Meanwhile, Mamamoo will release its best album ‘I Say MAMAMOO: THE BEST’ on various music sites on the 15th.