You really sleep in one bed? Choi Joon-ho, Bae Soo-jin 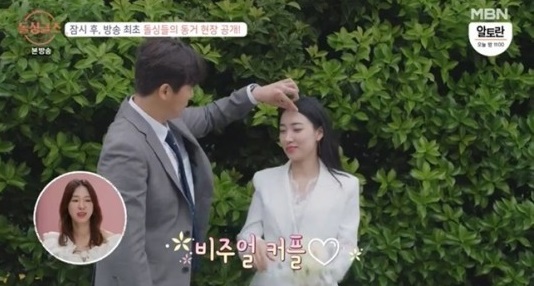 Choi Joon-ho and Bae Soo-jin started living together as the final couple.

In the MBN entertainment show “Doll Singles,” which aired on August 8, Bae Soo-jin and Choi Joon-ho were depicted living together.

Through the final choice, three couples were born: Choi Joon-ho ♥ Bae Soo-jin, Lee A-young ♥ Choo Sung-yeon, and Kim Jae-yeol ♥ Park Hyo-jung. The three couples had a wedding shoot first, and Lee Ji-hye provoked laughter by saying, “Where is marriage after meeting for three nights and four days?” Lee Hye-young said, “I have to live together,” adding, “It’s like a parent’s heart to marry.”

Bae Soo-jin’s straightforward remarks continued. While preparing the food, I said, “Shall we be your girlfriend? Do you want to be my wife? Please choose,” he laughed. Choi Joon-ho said, “It’s like a girlfriend. “I can’t call myself a wife,” he said. Bae Soo-jin said, “My ex-wife is really pretty, right? I think it’s rude. I’m sorry,” he said. Lee Hye-young, who saw this, said, “I know why you are asking. Ian has double eyelids, but Junho doesn’t. I can think that my wife’s eyes must have been pretty because they are not my dad’s eyes. Because I have never seen my daughter’s mother’s face, but I imagine it. I would have been curious about that,” he explained.

Choi Joon-ho showed his ex-wife’s face and Bae Soo-jin quietly recited, “Pretty.” Choi Joon-ho said, “I lived in a foreign country for a long time, but I did better to my parents than I thought. I admit that one thing. She broke up with me, but she gave birth to me. I wish him happiness because he dreamed of life together. At first, I hated it and hated it, but now I think it’s just right. Bae Soo-jin also agreed, “I don’t like it, but I want to live well for Rae-yoon,” and Choi Joon-ho said, “I have an intention to show it to you if Ian misses my mom.”

Bae Soo-jin said, “I don’t mean it in a bad way. “I look a lot like my ex-husband,” he said. Choi Joon-ho said, “You don’t look alike,” and Bae Soo-jin laughed, “I can’t take pictures well.” Bae Soo-jin once said that Choi Joon-ho looked like his brother, who he hated, and that his first impression was not good. The brother he knew was his ex-husband.